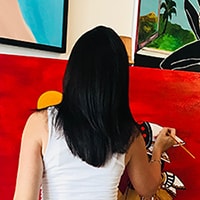 Passionate about painting and drawing since her youngest age, Olivia Garson began taking art classes for children in the famous Picasso Museum in Antibes, a town on the Côte d'Azur where she spent part of her childhood before moving with his brother and his parents to Aix-en-Provence. There, she continued taking classes and won the first painting prize in the junior category at the city's drawing school, which now houses the Granet Museum. While until now she was exploring different techniques, she preferred to turn to oil painting. After spending thirteen years in the south of France, she moved with her family to Paris, where she later made the choice to stay to further her studies. Trained in both management and marketing with a degree in journalism and communication at the Paris Dauphine University, Olivia considers writing and art as two liberating and therapeutic forms of expression. The artist was inspired by Asia, where she lived for four years in Indonesia (Jakarta), then in Singapore, to create new paintings. This experience at the other end of the world started at the same time as the beginning of her life as a mother, which explains some references to childhood in her work. The female figure, the Indonesian nature, as well as certain cultural elements, become recurrent in her paintings. Later, it is the Buddhist temples or scenes from everyday life that will inspire her as well. The works of this artist have the ability to transport us into an exotic and captivating world, while the brightness of the colors used provides a feeling of tranquility and joy that invites us to meditate upon ourselves. Her works are also an ode to travel and an incentive to discover the world around us.

"The world is a book and those who do not travel only read a page."

"A journey opens doors, but, what is the use of traveling if you take yourself with you ? It is the soul that we must change, not climate."

Leave me a message